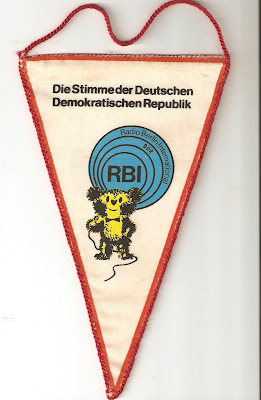 One of the most popular stations transmitting from the Eastern Bloc during the 1970s and 1980s was Radio Berlin International, the Voice of the German Democratic Republic. At the time RBI was the only shortwave station broadcasting from Berlin in English for North America. Most of its programs were centered on glorifying the socialist GDR state and its hard-line dictator Erich Honecker. But RBI knew its audience well. It was successful in attracting SWLs to tune in by offering spectacular QSLs and printed DX bulletins, setting up a monitoring panel, and promoting station fan clubs through the developing world. Following German reunification, RBI transmitted its last broadcast on October 2, 1990. The following is a reprint of a fact sheet I received in 1978 that tells you all about Radio Berlin International:

“Radio Berlin International stems from the “Foreign Languages Service” of GD Radio which broadcast its first foreign language programmes – in English and French – in 1955. Transmission in Swedish, Danish, Arabic and German soon followed. However, it wasn’t until May 1959 that the “Foreign Languages Service” became an independent broadcasting station under the auspices of the GDR State Committee for Radio and began its programmes with the station announcement: “You are tune to Radio Berlin International, the Voice of the German Democratic Republic.”

Gradually other programmes were introduced: Italian and Portuguese in 1961; Swahili in 1964; and Hindi in 1967. Spanish came a little later and in 1975 Greek was started. At present there are 50 ½ hours of programmes per day broadcast via directional and omni directional aerials on shortwave and on a further frequency for Europe in the medium waveband. The programmes, which generally last for about 45 minutes, are adapted to suit the interest of listeners in the various countries. They begin with a bulletin of the latest news and are repeated several times a day when conditions are most favourable for reception in the individual parts of the world. 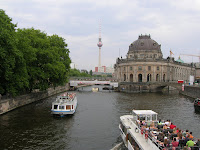 Radio Berlin International aims to provide its listeners all over the world with a picture of life in the socialist German Democratic Republic. We provide information on our peace policy and put forward our point of view on international events. RBI expresses its solidarity over the airwaves with all progressive forces fighting against imperialist exploitation and oppression and plays its part in the struggle for the welfare of mankind, for freedom, peace and friendship between peoples.

In 1967, the RBI Journal was brought out – initially in four languages – to supplement the broadcasts. By 1975 it was appearing in 12 languages.

The Journal publishes a list of the programmes, times and frequencies and provides facts, figures and pictures from all spheres of life to complement the information contained in the programmes themselves. It also acts as a forum for RBI Listeners Clubs and those who aren’t Club members to voice their opinions. A whole page is given over to the subject of DXing. Everybody who sends their address receives a copy of the RBI Journal free of charge. Regular listeners can be put on our mailing list on request. RBI Listeners Clubs are sent as many copies as they require.

These RBI Clubs are for the most part loose associations of friends who listen to us regularly and then write in and tell us of their impression of the programmes. There are well over a thousand such clubs in existence, most of them in Africa, South East Asia and Latin America.

The RBI DX Club was founded in 1967. Werner Neumann, RBI’s deputy editor-in-chief, has been the Club’s president since 1975. The Club has close contacts with many enthusiastic DXers and DX organisations all over the world. Our QSL cards and diplomas for 50 or 1000 correct reception reports are internationally very much in demand. The RBI DX Club meeting goes out over the air every two weeks, the 250th meeting being celebrated on 15 November 1976.”
Posted by madrid kid at 1:19 AM

Thanks for bringing back happy memories of SWLing while still at primary school in the late 1980s.

I Remember the quality magazine that RBI would send out, always interesting with a high standard of photographs.

If you like this site or have any comments or issues you would like to discuss, please post me a message. I look forward to hearing from you. Thanks!

Create your own Blogbox!